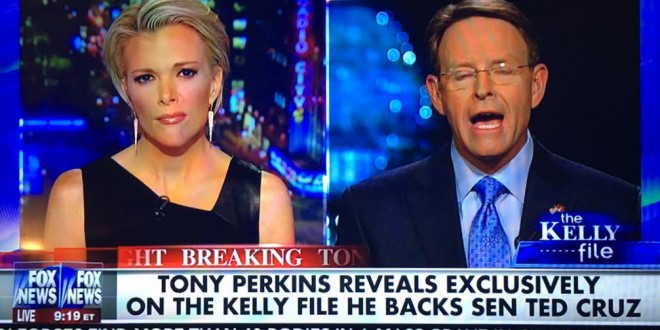 Surprising absolutely no one, tonight hate group leader Tony Perkins “exclusively” appeared on Megyn Kelly’s Fox News show to endorse Ted Cruz. Perkins carefully stipulated that his is a personal endorsement and not one from the “non-profit groups I run.”

That leaves the door open for the Family Research Council to endorse Trump should he win the GOP nomination. Perkins also declared that he likes Trump, but he just likes Cruz better “because I know him and I’ve worked with him for years.”

Last month we learned that Perkins had organized secret meetings of well-known evangelicals, where he led the pressure for the group to unanimously endorse Cruz. A slew of Cruz endorsements followed, but apparently Perkins decided that he’d play kingmaker and deliver his at the last moment while Cruz is sagging in the Iowa polls.

Previous Fox News Mocks After Trump Threatens To Skip Debate Because Megyn Kelly Has A Bloody Wherever
Next BREAKING: Ammon Bundy Arrested After Shootout With Federal Agents, One Oregon Militia Member Dead