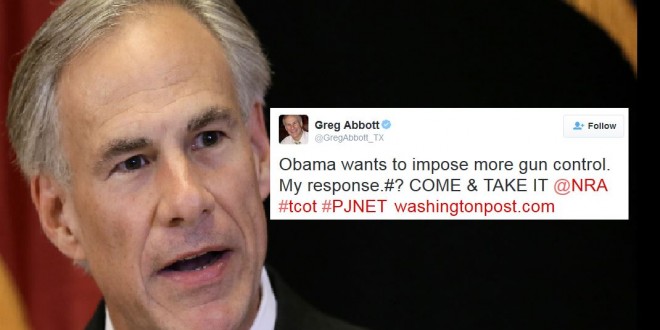 Texas Gov To Obama: Come Try And Take My Gun

Texas Gov Greg Abbott criticized President Barack Obama’s plan to move ahead with possible executive actions on guns in a tweet in which he told the Commander-in-Chief to ‘come & take’ the state’s guns. Obama said in his weekly radio address that he is looking for ways to keep guns out of the hands of ‘a dangerous few’ without depending on Congress to pass a law on the fraught subject of gun control.

He plans to meet his attorney general, Loretta Lynch, on Monday to see what executive actions might be possible. Steps to strengthen background checks could come this week. At a rally in Biloxi, Mississippi, Donald Trump also pledged to undo any action Obama takes on gun control if he wins the next election. Trump said: ‘He can’t do that. I will veto that. I will unsign that so fast, so fast.’

Previous Supreme Court Justice Antonin Scalia: Government Should Favor Religion Over Non-Religion
Next Kylie Minogue – Off With His Shirt [VIDEO]