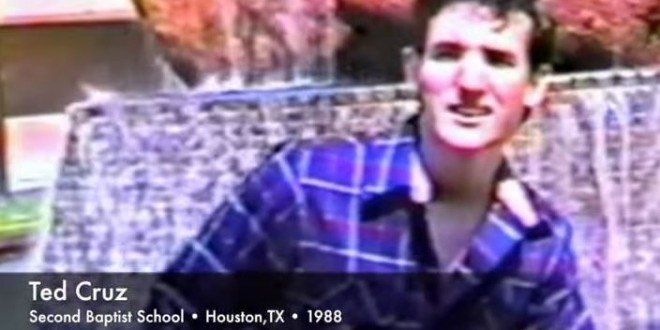 A new video of a teenaged Ted Cruz, posted Saturday on YouTube, shows a lankier and younger version of the future Republican presidential candidate sarcastically talking about his life’s goals —and they’re far more ambitious than the mere presidency. “Take over the world, world domination, you know, rule everything. Rich, powerful, that sort of stuff,” Cruz says.

Off camera, the teenager identified as an 18-year old Cruz is asked about his life’s aspirations. “Aspirations? Is that like sweat on my butt?” a sardonic Cruz says at the start of the 30-second clip, wearing jeans and a tucked in shirt. “No no, oh I see, what you want me to do, what I want to do in life.”

Cruz squints his eyes tilts his head to the sky. “Well my aspiration is to, uh, oh I don’t know, be in a teen tit film like that guy who played Horatio. You know he was in Malibu Bikini Beach Shop,” he says. The reference appears to be to a 1986 movie, The Malibu Bikini Shop, which came out two years before the video was filmed.