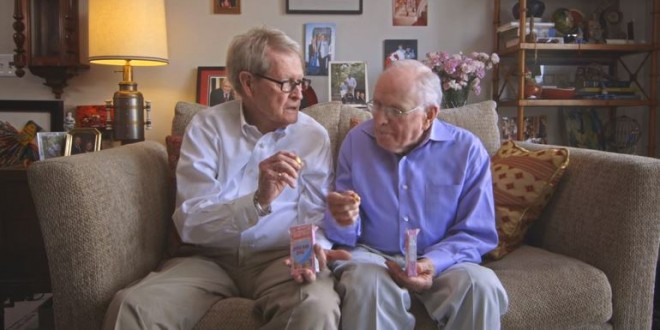 Jack and George have been “sweethearts” for 55 years and they married in Texas after the Obergefell ruling. Another great story from AdWeek:

Candy maker Necco is expanding the definition of “sweetheart” to celebrate the 150th anniversary of its heart-shaped confections stamped with messages of love and affection. A new campaign from Hill Holliday seeks to give the brand a modern makeover by plugging into social themes, including marriage equality. That’s a novel approach for the confectionery category and a new recipe for this historically conservative marketer, which produces some 2.5 billion—yes, that’s billion—of the candies each year.

Toward that end, Necco is inviting folks to visit a contest website and share their sweet stories “of sharing, love, friendship and words from the heart” for a chance to win $5,000. On the homepage, they’re greeted by the campaign’s centerpiece—a video that tells the story of Jack and George. Now in their 80s, the Texans have been “sweethearts” for 55 years. They wed in 2015, shortly after the landmark Supreme Court decision legalizing same-sex marriage. This year marks the first Valentine’s Day they’ll be able to celebrate as a legally married couple.

More gay couples are featured on the contest website.