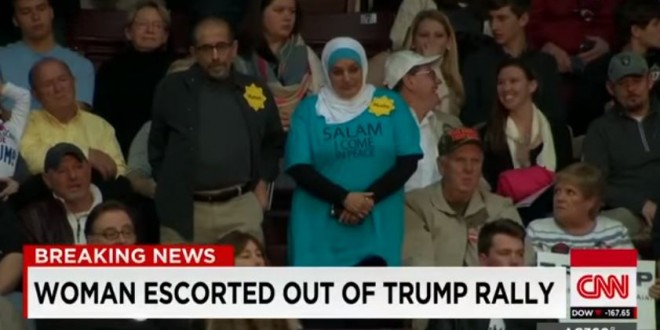 A Muslim woman wearing a hijab was escorted out of Donald Trump’s campaign event on Friday by police after she stood up in silent protest during Trump’s speech.

Rose Hamid, a 56-year-old flight attendant sitting in the stands directly behind Trump, stood up Friday during Trump’s speech when the Republican front-runner suggested that Syrian refugees fleeing war in Syria were affiliated with ISIS.

Despite her silence, Trump supporters around her began chanting Trump’s name — as instructed by Trump campaign staff before the event in case of protests — and pointed at Hamid and Marty Rosenbluth, the man alongside her who stood up as well.

As they were escorted out, Trump supporters roared — booing the pair and shouting at them to “get out.” One person shouted, “You have a bomb, you have a bomb,” according to Hamid.

As you’d expect, right wing sites are claiming that the woman was “paid plant” by leftists/Obama/Clinton/Sanders/Soros.  In the second clip below, she recounts her ejection.