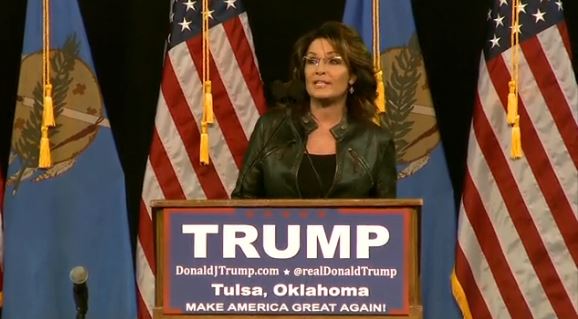 Speaking today at a Donald Trump rally, Sarah Palin brought up Monday’s domestic abuse arrest of her son, Track. According to Palin, Track suffers from PTSD from his time in Iraq, which is President Obama’s fault for not respecting the military. NBC News reports:

Sarah Palin suggested Wednesday that her son’s arrest on domestic violence charges this week stemmed from Post Traumatic Stress Disorder and – in part – the president’s lack of “respect” for veterans.

Addressing what she called “the elephant in the room” during a rally in support of Donald Trump, Palin said her son Track came back “different” from his year-long deployment in Iraq.

“My son, like so many others, they come back a bit different, they come back hardened, they come back wondering if there is that respect for what it is that their fellow soldiers and airmen every other member of the military so sacrificially have given to this country,” she said after alluding to the arrest.

“It starts from the top. The question though it comes from our own president, when they have to look at him and wonder, do you know what we go through, do you know what we’re trying to do to secure America and to secure the freedoms that have been bequeathed us?” she added. “So when my own son is going through what he goes through, coming back, I can certainly relate with other families who feel these ramifications of some PTSD and some of the woundedness that our soldiers do return with.”

According to police reports, Track Palin beat his girlfriend, then put an AR-15 to his head and taunted her for not believing he’d kill himself, saying, “Do you think I’m a pussy?”