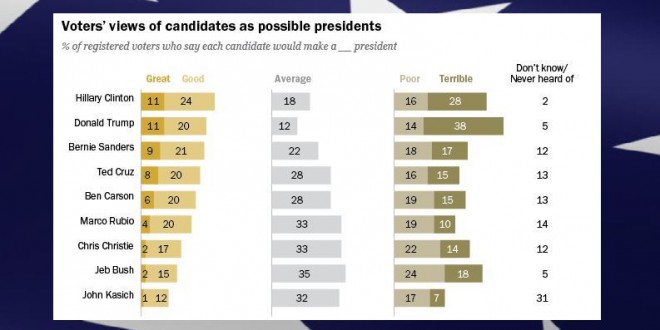 Hillary didn’t do so great either. From Pew Research:

A year before the next president takes office, voters are skeptical that any of the leading 2016 candidates would make a good president. Moreover, of nine candidates included in the survey, far more voters say each would make a “terrible” than “great” president.

The latest national survey by the Pew Research Center, conducted Jan. 7-14 among 2,009 adults, including 1,525 registered voters, finds that 35% of voters say that Hillary Clinton would make either a good or great president, with 11% saying she would be great. More voters (44%) say Clinton would be either poor or terrible in the White House; 28% say she would be terrible. About one-in-five (18%) think Clinton would make an average president.