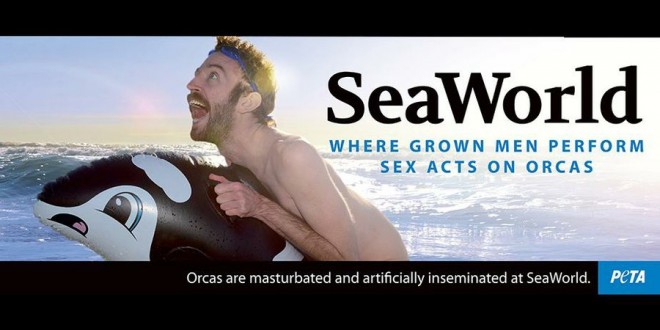 PETA is stepping up its anti-SeaWorld campaign with a billboard it hopes to place in San Diego featuring an apparently naked man atop a toy orca below the message: “SeaWorld: Where grown men perform sex acts on orcas.”

While it’s unlikely the animal rights group will find a billboard company willing to accept the provocative ad, PETA representatives said Wednesday they’re determined to showcase it in San Diego, even if it means opting for a mobile billboard on a truck.

“If people get a real understanding of what SeaWorld is doing, that their business model relies on sexually assaulting male orcas and forcibly impregnating unwilling females, that’s what they are going to find off-putting, not the billboard,” said Ashley Byrne, a campaign specialist with PETA. “I don’t think there’s a nice way to talk about that.”

Manual semen extraction is hardly uncommon. Ask any zookeeper or farmer. That said, I find it remarkably easy to detest PETA’s histrionics and still hope for the demise of SeaWorld.