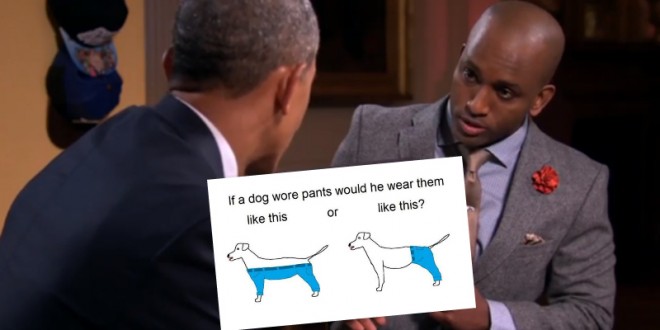 President Obama has weighed on the hottest Internet debate since the blue-or-gold dress. Dogs should wear their pants on two hind legs, not on all four.

That presidential declaration came Friday during a series of interviews with YouTube stars in the East Room of the White House. Adande Thorne, also known as sWooZie, asked the president about an Internet meme created by Maxim Magazine’s Jared Keller.

“The American people really want to know this one. I lied. This is actually a serious one,” Thorne said during a “lightning round” of pop culture questions. “If you had to pick a pair of pants for your dog, A or B?”

“No, you gotta go with this,” Obama said, pointing to the second photo of a dog wearing pants on two legs, and rejecting the four-legged version.

“This one? This is your final answer? You don’t want to phone a friend?”

“This one is a little too conservative. Too much. Too much fabric,” Obama said.