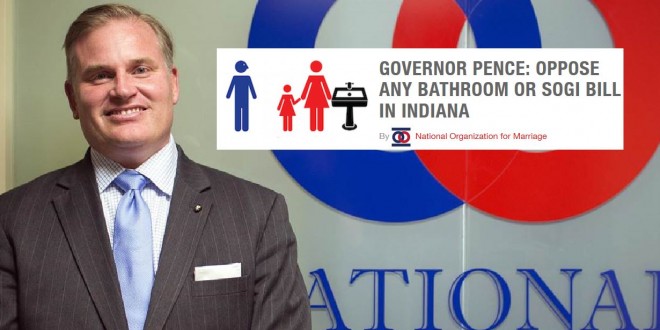 Unbelievably, Republican Governor Mike Pence of Indiana is considering endorsing a Bathroom Bill in Indiana that would ignore the reality of being male and female and allow men to use intimate facilities reserved for women and girls (bathrooms, showers, locker rooms, etc.) He’s considering kowtowing to the radical left despite the overwhelming voter rejection of a similar proposal in Houston just a few weeks ago.

Once seen as a conservative rising star among Republican elected officials, Pence badly mishandled the religious liberty issue last year in Indiana and signed into law legislation that seriously damages the ability of Hoosiers to live out their faith in their everyday lives. Now he is considering going even farther — letting men into intimate facilities reserved for girls and women.

Please act immediately to sign our petition to Governor Pence urging him to reject any Sexual Orientation and Gender Identity (SOGI) legislation in Indiana. These SOGI bills always strip people of their religious liberty rights. And they endanger women and children and strip them of their privacy rights not to be confronted by a man in women’s clothing in a restroom.

Once you’ve signed the petition, please forward it to at least five others and ask them to sign. We need a massive national uprising to show Governor Pence that we are watching and that we demand he not succumb to pressure from the radical left.

The petition has just under 1000 signatures at this writing. Disqus comments are open at the link.