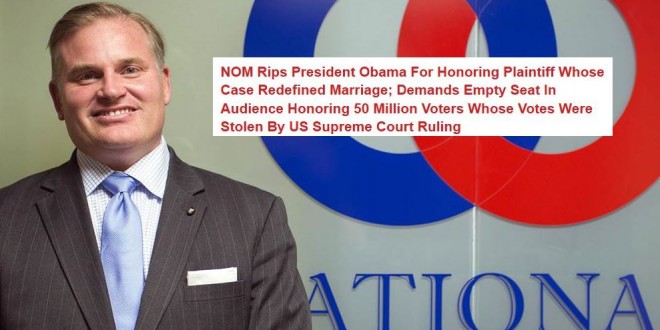 L to the O to the L. Via press release:

The National Organization for Marriage (NOM) today sharply condemned President Obama for inviting Jim Obergefell, one of the plaintiffs whose case was used by the US Supreme Court to impose same-sex ‘marriage’ on the nation, to attend the State of the Union speech and called for the Republican leadership to set aside a vacant seat in the front of the chamber in honor of the missing 50 million voters whose votes were stolen by the Supreme Court ruling in the Obergefell v Hodges case.

“It’s an outrage that President Obama is honoring the extermination of true marriage in our nation’s laws as a result of an anti-constitutional, illegitimate ruling of the US Supreme Court,” said Brian Brown, NOM’s president. “President Obama is trying to honor something that is completely dishonorable because it strips from the law the truth of marriage as the union of one man and one woman, and substitutes a fiction from the left that marriage can be anything you want it to be.”

Brown also pointed out that since the Obergefell ruling imposing gay ‘marriage’, countless Christian small business owners have been subjected to extreme punishment by the government for refusing to abandon the truth of marriage.

“If the President wanted to do justice concerning this ruling, he would have invited all the people of faith who have been victimized by it — bakers, florists, photographers, nonprofit groups, etc. — and apologized to them and the American people for the supreme lie that is same-sex ‘marriage.’ The Obergefell ruling has exposed the falsehood that there would never be consequences for redefining marriage, our most fundamental and important social institution.”

And by “countless” Brown is referring to the literal handful of businesses so far fined for breaking state law.