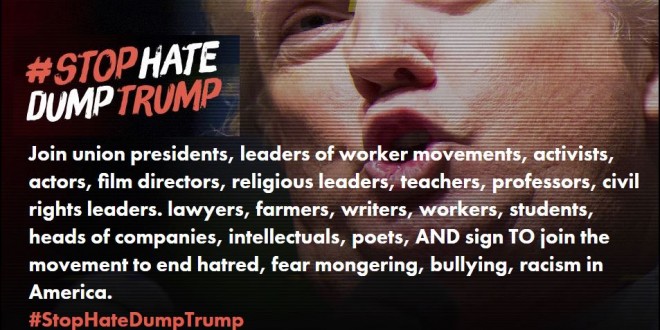 A diverse coalition cutting across race, gender, religion, sexual orientation and party affiliation has organized to give voice to Americans calling out Donald Trump for his hate speech, misogyny, Islamaphobia, and racism. A new web site, StopHateDumpTrump.com will provide a platform for those who do not and will not stand for the continued threats, rhetoric and fear mongering by the Republican Presidential front-runner.

“Trump is a frontrunner candidate who promises to ‘build a wall’ on our borders, humiliates and denigrates Muslims, women, immigrants, racial minorities as part of his ‘stump speech,’ allows protesters to be beaten at his rallies and in fact encourages hostility toward anyone who disagrees with him,” said Eve Ensler, activist and playwright.

Hit the link for more names and to add your own.