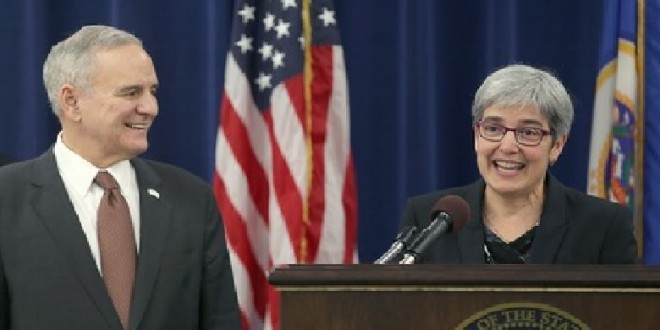 Gov. Mark Dayton announced Friday he would appoint Court of Appeals Judge Margaret H. Chutich as associate justice of the Minnesota Supreme Court. Chutich would be the first openly gay member on the state’s highest court.

She would fill the vacancy left by Wilhelmina M. Wright, who was confirmed by the Senate this week to the U.S. District Court of Minnesota as the state’s first black female federal judge.

“It is important that the court reflect the community it serves, and I also think symbolism is very important,” Chutich told reporters. “If there are gay attorneys, gay people thinking about going to law school, I think it’s important that they know there aren’t barriers to their dreams.”

Dayton appointed Chutich to her position as at-large judge on the Court of Appeals in 2012. She also served as assistant dean at University of Minnesota’s Humphrey School of Public Affairs, as Deputy Attorney General of the Law Enforcement Section with the Minnesota Attorney General’s Office, and as an assistant U.S. Attorney for the District of Minnesota.