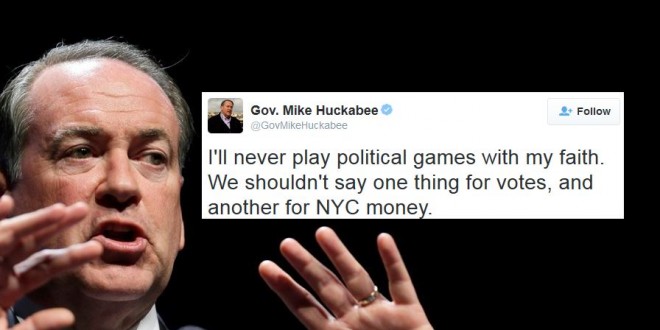 And you thought that story was dead by now. Via The Hill:

GOP presidential candidate Mike Huckabee joined the growing number of Republicans criticizing rival Ted Cruz by attacking him for meeting with gay businessmen despite being a staunch opponent of gay marriage. Huckabee on Wednesday tweeted a link to a New York Times article about the meeting, saying “I’ll never play political games with my faith.”

“We shouldn’t say one thing for votes, and another for NYC money,” he added. The story, published in April 2015, describes how two prominent gay hotel owners hosted Cruz for a meet and greet in their New York City penthouse. Cruz has taken heavy criticism after he attacked “New York values” despite relying on donors in the city for campaign contributions.

Last summer’s boycott of the Fire Island businesses owned by the pair largely fizzled, mostly because residents had nowhere else to go.