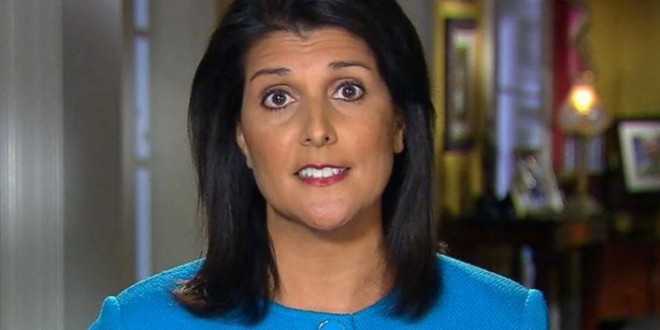 Lost In The Backlash: Nikki Haley Promised That Next GOP President Will “Respect Modern Families”

Yesterday all of Teabagistan went insane over South Carolina Gov. Nikki Haley’s swipe at Donald Trump during her GOP-vetted response to Obama’s final State Of The Union address. Largely lost in the renewed GOP-Trump civil war, however, was Haley’s promise that the next Republican president will “respect differences in modern families” – a fairly clear reference to gay marriage. The rabidly anti-gay LifeSiteNews did notice. They write:

The next Republican president will “respect” different forms of marriages, including same-sex “marriages,” South Carolina Gov. Nikki Haley said in last night’s Republican response to the State of the Union address.

“If we [Republicans] held the White House,” she said, “we would respect differences in modern families, but we would also insist on respect for religious liberty as a cornerstone of our democracy.” Even the terminology “modern families” evokes the ABC sitcom featuring a homosexual couple raising a child.

The GOP has been uncertain how to respond to the Supreme Court’s Obergefell v. Hodges case, with only one of the top-tier candidates – Ted Cruz – campaigning for a Constitutional amendment returning the issue to the states.

Many candidates and the GOP’s most powerful policy makers have instead said the GOP must “move on” from the ruling, accepting the 5-4 decision as settled law but acting to grant some protections to those who have religious objections to participating in same-sex “marriage” ceremonies.

The speech by Haley, who was hand chosen for the response by the Republican Party’s leadership, amplifies that decision to accept redefined marriage as the new normal.

While the GOP overlords, including chairman Reince Priebus, have said that they saw Haley’s speech before giving their approval, much of GOP presidential field save Trump have vowed to somehow rollback same-sex marriage. Still, it appears that the GOP establishment has informally signaled their surrender.