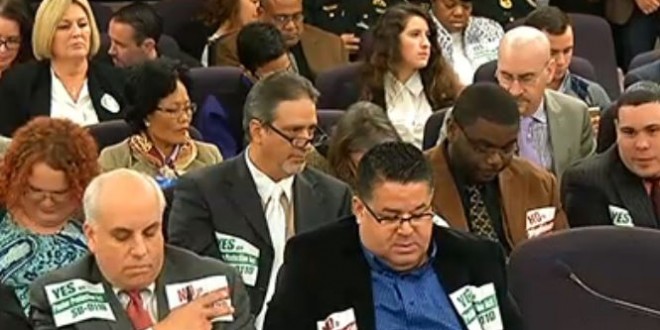 The Florida Senate Judiciary Committee is just beginning its hearing on a comprehensive LGBT anti-discrimination bill. The chamber appears to be packed with supporters and our enemies. Watch at this link. Equality Florida has the details:

The committee will hear The Florida Competitive Workforce Act (SB 120) which would prohibit discrimination against LGBT people in employment, housing and public accommodations. This the first time the legislation will be heard by legislators.

“This is a huge breakthrough not only for Florida but for the South and the nation as the third most populous state takes up long overdue, basic protections.,” said Nadine Smith, Equality Florida’s Executive Director. “The Florida Competitive Workforce Act has bipartisan support in both chambers, the support of Fortune 500 Companies, over 400 small businesses and a strong majority of Floridians. It’s time for Florida to pass this common-sense legislation.”

Currently 55% of Florida’s population, in 38 municipalities, are protected at the local level by nondiscrimination laws, but no uniform statewide law exists, leaving many vulnerable to discrimination. The bill would add sexual orientation and gender identity or expression to pre-existing nondiscrimination laws that already cover race, religion, disability, age and other categories.