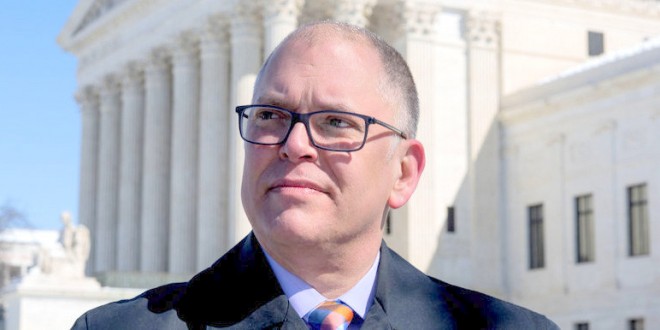 Jim Obergefell To Sit With First Lady During SOTU

This morning the White House announced that Jim Obergefell will be among the guests seated with the First Lady during President Obama’s final State Of The Union address. From their bio on Obergefell:

Jim Obergefell was the named plaintiff in the landmark marriage equality case Obergefell v. Hodges, which ruled same-sex couples nationwide have the Constitutional right to marry. In 2013, Jim married his partner of 20 years, John, who was dying of ALS. Their marriage – performed in Maryland – wasn’t recognized in their home state of Ohio, setting off a legal proceeding over whether the marriage should be recognized under Ohio law and listed on John’s death certificate.

While they won the initial legal battle, Ohio appealed, and their case eventually made its way to the Supreme Court, which declared marriage equality the law of the land. Jim considers himself an accidental activist, one who became entwined in a political statement larger than himself – a statement of equality and dignity that Americans have been fighting for since this nation’s founding – and he now remains committed to ensuring the civil rights for all Americans.

Other guests to be seated with the First Lady include a Syrian refugee, an Obamacare navigator, Microsoft CEO Satya Nadella, and USAF Sgt. Spencer Stone, who helped thwart a terrorist attack on a Paris-bound train. The press release includes this important notation:

We leave one seat empty in the First Lady’s State of the Union Guest Box for the victims of gun violence who no longer have a voice – because they need the rest of us to speak for them. To tell their stories. To honor their memory. To support the Americans whose lives have been forever changed by the terrible ripple effect of gun violence – survivors who’ve had to learn to live with a disability, or without the love of their life. To remind every single one of our representatives that it’s their responsibility to do something about this.

Previous Powerball Soars To World Record $1.3 Billion
Next Word Of The Year: The Singular “They”