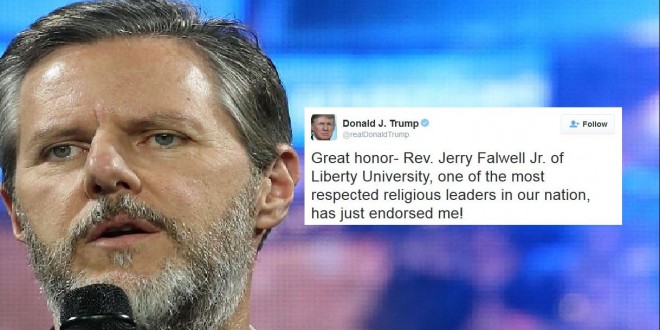 Liberty University president Jerry Falwell Jr., the son of the late televangelist, endorsed Donald Trump on Tuesday, giving Republican front-runner the blessing of one of the evangelical community’s biggest names just days before the Iowa caucuses. In a statement announcing his endorsement, Falwell called Trump “a successful executive and entrepreneur, a wonderful father and a man who I believe can lead our country to greatness again.”

Falwell’s move has long been expected since he has showered praise on the billionaire in recent weeks and developed a rapport with Trump. But the timing of the formal announcement is significant, coming as Trump and Ted Cruz compete intensely in Iowa for the support of social conservatives.

“It is truly an honor to receive Jerry’s endorsement. Not only is he a high-quality person, with a wonderful family, whom I have great respect for – I also consider him a very good friend and his support means so much to me,” Trump said in a statement.

Last week Trump also called Sarah Palin a “high-quality person” after her endorsement. His number of endorsements from noted evangelicals remains low as most have coalesced behind Ted Cruz.

Previous And The Teabagistan Civil War Rages On
Next Mat Staver: Homosexuals Have Imposed An Islam-Style “Jizya Tax” On American Christians [AUDIO]