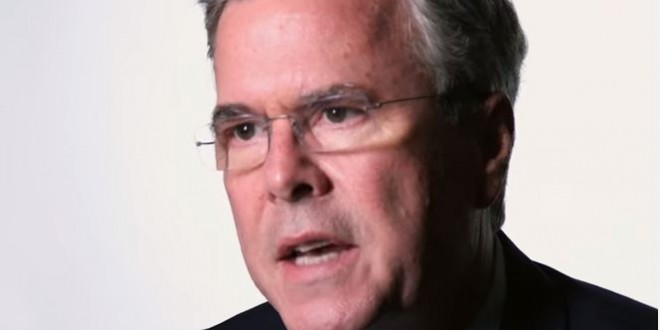 Jeb Bush Ad: I’ll Save Your Guns From Obama (Even If I Never Actually Got A Gun From Moses) [VIDEO]

Jeb Bush today rushed out a pro-gun ad just one day after he was busted for “mistakenly” claiming to have received an award from the NRA and a rifle from Charleton “Moses” Heston. CNN reports:

Jeb Bush loves talking about how Moses once gave him a gun. A staunch supporter of Second Amendment rights, Bush frequently tells the story of being honored as National Rifle Association “Statesman of the Year” and being awarded a gun by Charlton Heston.

It’s a similar story he’s repeated as recently as Sunday in an interview with Fox News. He told it three other times in late December in New Hampshire — and in South Carolina in September and in Iowa in October. It’s embedded in his answer when he’s asked about gun control.

But it appears that story didn’t exactly happen, in a revelation first reported by BuzzFeed News. Tim Miller, communications director for Bush’s campaign, said in a statement that Bush “was mistaken and conflated multiple events unintentionally.”

Bush indeed delivered the keynote address at the NRA’s annual meeting in 2003 when he was governor of Florida and was presented with a rifle — but not from the famous actor. And he wasn’t designated “Statesman of the Year.”