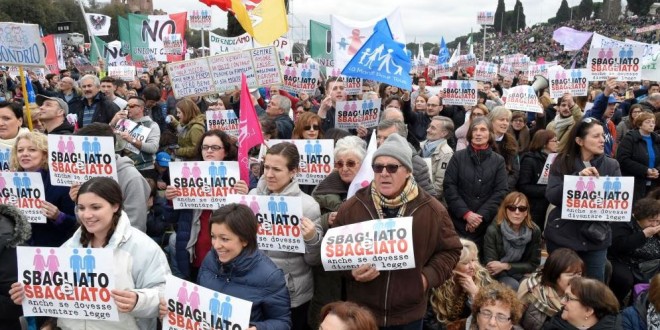 Anti-LGBT groups and the Catholic Church have organized a massive rally taking place in Rome today against the civil unions bill under consideration in Parliament. The day began with Anonymous hacking the website of the group organizing the protest, replacing their banner with a “Love Is Love” message. The Guardian reports:

Tens of thousands of people have gathered in Rome to protest against legislation that would allow civil unions for same-sex couples in Italy. It is the only major western nation yet to grant gay couples the power to make a legal commitment or adopt children.

The Italian senate began examining the bill on Thursday. Its supporters argue that it must be voted in following repeated complaints from the European court of human rights about the country’s failure to change the law. However, opponents hope their protest on Saturday, backed by the Catholic church, will prevent that happening. A similar “family day” protest in 2007 forced Romano Prodi’s government to abandon a much less ambitious civil union proposal.

The senate is expected to vote on the bill in mid-February before it goes to the lower house of parliament. The Italian Bishops Conference (CEI) said on Friday it was concerned about the “process under way of putting marriage and civil unions on the same level – with the introduction of an alternative to the family”. Last week, Pope Francis reiterated the Catholic church’s opposition to gay marriage, saying that the traditional family was “the family God wants”.

Last week LGBT groups and allies staged pro-civil unions rallies in dozens of Italian cities. Authorities in Rome say they are prepared for a crowd as large as 500,000 today.