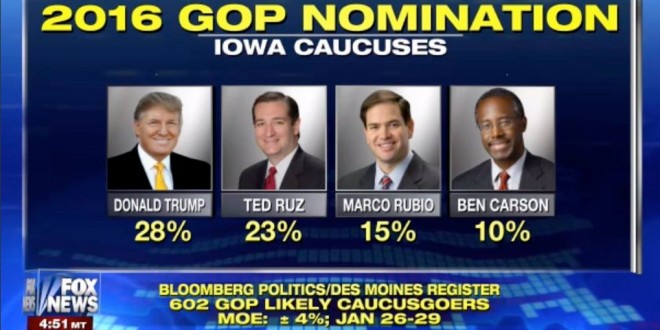 Hillary Clinton is holding onto a slim lead over Bernie Sanders in Iowa as Democrats prepare for Monday’s caucuses, though an outpouring of young voters and those who say the system is rigged could enable Sanders to pull off an upset, according to a new poll.

Only one in three likely Democratic voters in the survey are first-time caucus-goers, who break decidedly toward Sanders. That compares with 60 percent in the final pre-caucus survey of 2008, when a wave of young voters and new participants helped Barack Obama overpower Clinton in Iowa.

In addition, the survey finds Clinton’s support is deeper and sturdier than Sanders’ across many areas, with 53 percent saying they’d be very enthusiastic with her as the party’s nominee. Most tellingly, 83 percent of her voters say their minds are made up to support Clinton.

Republican presidential candidate Donald Trump just got some good news two days before his campaign’s biggest day. Trump leads the GOP field with 28 percent support in Iowa, according a Des Moines Register/Bloomberg poll released Saturday evening. The results come just days before the Iowa caucuses on Monday, where Trump’s ability to turn out voters will be put to the test. Rival Ted Cruz comes in second with 23 percent.

Cruz led the previous version of the poll released Jan. 13 with 25 percent, with Trump behind him at 22 percent. Marco Rubio came in third place with 15 percent, and Ben Carson in fourth with 10 percent. Rand Paul follows with 5 percent. Chris Christie has 3 percent, and Jeb Bush, Carly Fiorina, Mike Huckabee, John Kasich and Rick Santorum have 2 percent each.

Previous Tired Old Queen At The Movies #139 [VIDEO]
Next WYOMING: Liz Cheney To Run For US House