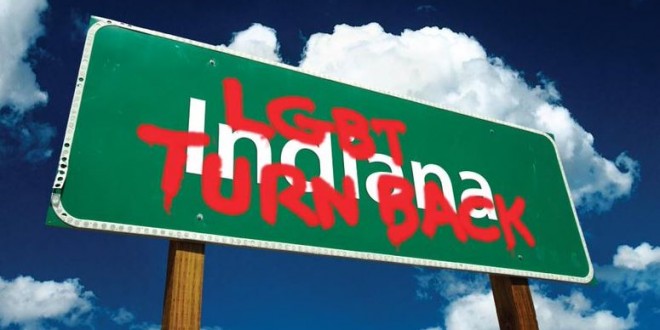 After hours of testimony from local and national hate groups as well as sobbing out-of-state martyred anti-LGBT business owners, the Indiana Senate Rules and Legislative Procedures committee tonight advanced a heavily-amended “LGBT rights” bill that actually worsens the already poor civil rights status of LGBT Hoosiers. Activist groups below are calling for “all hands on deck” to stop the bill.

“Lawmakers still aren’t listening. Tonight, they took a bad bill and made it worse for LGBT people in our state who have to live each day in fear that they could be fired, denied housing or turned away from a public place for who they are.

“Senate Bill 344 continues to fall far short of ending legal discrimination against LGBT people in our state. As amended, it repeals the Indiana Religious Freedom Restoration Act but replaces it with substandard protections that omit transgender people entirely and provide religious carveouts that undermine the very purpose of the civil rights law. We will continue to work with lawmakers to fix this bill, but we are disappointed that they have not made the substantive changes we know a majority of Hoosiers want to make our state open and welcoming to all people.

Lambda Legal is calling on Indiana’s LGBT people, allies, business leaders, athletes and advocates to re-engage in the fight against SB344, a bill that will damage LGBT Hoosiers.

“Senate Bill 344 provides such a broad license to discriminate based on religion that it is nothing short of a Super RFRA,” said Camilla Taylor, Counsel in the Midwest Regional Office of Lambda Legal. “This bill also does not even pretend to protect transgender Hoosiers, excluding them entirely, which is completely unacceptable. The sheep’s clothing barely covers the wolf. Like last spring, we need all hands on deck. As written, SB 344 is designed to hurt LGBT people in Indiana. Anyone who supports this bill doesn’t have the best interests of the LGBT community in mind.”

“Allowing this bill to take even one step forward is an appalling mistake and a betrayal of all Hoosiers,” said Taylor. “Legalizing discrimination robs Indiana of business and opportunity, and worsens the state’s already muddied reputation. We are just starting to understand the extent of the damage caused by last year’s RFRA, which according to media reports cost the City of Indianapolis an estimated $60M in lost opportunities. It is clear that Indiana hasn’t bounced back from last year’s fight–far from it. The Governor can claim that Indiana is a welcoming state, but businesses clearly know better because they are choosing to set up shop elsewhere.”

The Senate Committee rejected an amendment proposed by Senator Lanane that would have eliminated these damaging religious exemptions and would have provided protection from discrimination to transgender people. Among the amendments accepted to SB 344 was an amendment to allow anti-abortion organizations to exclude lesbian and gay people. Another would allow nonprofit organizations, with no affiliation to a church or faith, to discriminate if they offer religious-centered programs, even if they receive state-funding.

The legislation is a thinly-veiled attempt to allow discrimination to go forward but mitigate the economic and reputational damage still looming from Gov. Mike Pence’s discriminatory RFRA fight last year. Earlier this week, a new report estimated the state of Indiana lost $60 million as the result of last year’s effort to discriminate against LGBT people; nevertheless today, state lawmakers passed this new discriminatory legislation — Senate Bill 344 — out of committee by a vote of 7 to 5.

“Once again, Indiana lawmakers are trying to pass a bill that unacceptably leaves LGBT Hoosiers at continued risk of discrimination, and now even includes dangerous RFRA-like language attached as an amendment that strips away last year’s so-called ‘fix’,” said HRC Legal Director Sarah Warbelow. “S.B. 344 is deeply flawed across a number of areas, but most importantly, it would leave transgender Hoosiers behind. With the new amendment attached, it could now also allow anyone to wield religion as a sword of discrimination.

We implore the Indiana Legislature to abandon this dangerous legislation, and instead seek to pass fully inclusive non-discrimination protections that would truly safeguard LGBT Hoosiers and visitors from discrimination.”

Several amendments were added to the legislation during today’s hearing and make S.B. 344 even more alarming. In addition to enshrining a RFRA-like standard minus last year’s RFRA “fix,” another amendment added would allow adoption agencies to discriminate on the basis of sexual orientation, even if they receive state funding.