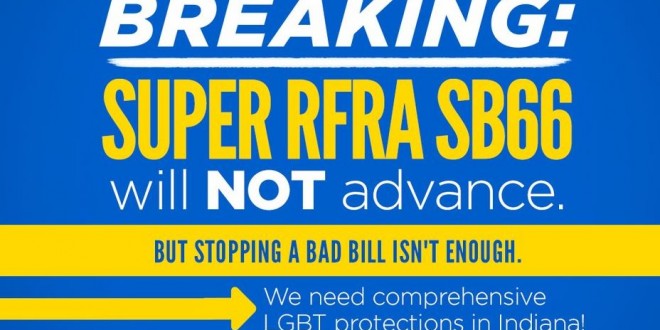 The Senate Rules Committee just decided to not advance SB66, the “Super RFRA” bill! That means this heinous bill is almost certainly dead for this legislative session — and it’s because of your hard work!

It’s certainly a relief that Hoosiers will be spared a second RFRA-fueled tragedy. But lawmakers shouldn’t pat themselves on the back quite yet. It’s unfathomable that willingly taking our state down this same dark road of destruction was even up for consideration.

Even more importantly, rejecting SB66 does nothing to solve the real problems we know are facing Indiana: LGBT Hoosiers have no explicit protections—and our state’s reputation and economy suffer each and every day as a result.

Today at 4pm, lawmakers have a chance to begin righting that wrong as the Senate Judiciary Committee considers SB100 and SB344. As written, these two bills are unacceptable and fall WAY short of protecting LGBT Hoosiers, especially transgender people.

I’ll post a live thread shortly before this afternoon’s hearing.

UPDATE: Lambda Legal says hold your horses on the above bills.

SB 100 and SB 344 would permit publicly funded discrimination by social service agencies. Adoption agencies and others receiving taxpayer funding to serve the public should not be permitted to exclude people from services or benefits based on who they are. SB 100 and SB 344 would permit businesses to refuse to serve same-sex couples celebrating a wedding or anniversary.

SB 100 and SB 344 are a “package deal.” In both bills, if one part is struck down by a court because it is unconstitutional, all the other parts, including any protection from discrimination based on sexual orientation or gender identity, go down with it. Many provisions in both of these bills are legally questionable and at least some are likely to be struck down.