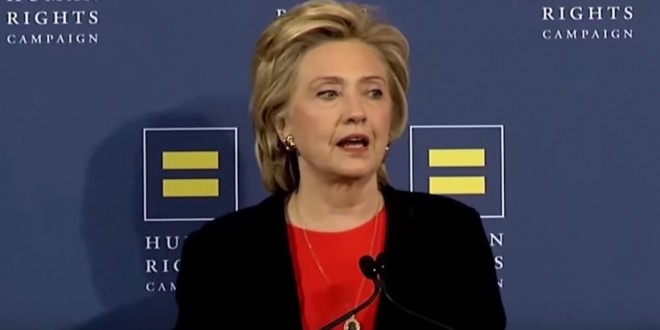 The Human Rights Campaign, (HRC) the nation’s largest lesbian, gay, bisexual and transgender (LGBT) civil rights organization, today announced its endorsement of Hillary Clinton for President. HRC’s Board of Directors, comprised of 32 community leaders from across the nation, unanimously voted to endorse Secretary Clinton — an endorsement she will accept next Sunday, January 24 at an event in Des Moines, Iowa with HRC President Chad Griffin and the organization’s members and supporters.

Today’s endorsement comes at a time when the stakes could not be higher for the LGBT community. Over the last seven years under President Obama’s leadership, the nation has made substantial progress on LGBT equality — from the end of “Don’t Ask, Don’t Tell,” to his Executive Order protecting LGBT employees of federal contractors from discrimination, to his historic support for nationwide marriage equality, to signing landmark hate crimes legislation, speaking out against so-called “conversion therapy,” and working to protect LGBT students. Despite the fact that a majority of Republican and Independent voters today support federal protections for LGBT Americans, the leading Republican candidates for president have threatened to halt progress as well as revoke, repeal, and overturn the gains made during President Obama’s two terms.

HRC President Chad Griffin said, “All the progress we have made as a nation on LGBT equality — and all the progress we have yet to make — is at stake in November. In most states, LGBT people are still at risk of being fired, evicted or denied services simply because of who they are. Today, 63 percent of LGBT Americans report having experienced such discrimination, and we are seeing other troubling trends, from the onslaught of state and local anti-LGBT measures to the national scourge of anti-transgender violence to backsliding on HIV/AIDS prevention and youth homelessness. Against this backdrop, we’ve heard the leading Republican presidential candidates repeatedly threaten to block our progress, and to revoke, repeal, and overturn the gains we’ve made during President Obama’s two terms.

“While they fight to take us backwards, Hillary Clinton is fighting to advance LGBT equality across our nation and throughout the world. We are proud to endorse Hillary Clinton for president, and believe that she is the champion we can count on in November — and every day she occupies the Oval Office.”

The HRC’s first endorsement of Obama didn’t come until June 2008.

UPDATE: The Clinton campaign has reacted with a message from Hillary.

“I’m honored to receive the endorsement of the Human Rights Campaign—the nation’s largest organization working to achieve full equality for lesbian, gay, bisexual, and transgender Americans. Thanks to the Human Rights Campaign and millions of advocates across the country, we’ve made tremendous progress. But our work is far from over. Too many LGBT Americans still face discrimination—in employment, in housing, in education, in health care—because of who they are or who they love. And the stakes in this election couldn’t be higher. The Republican candidates for president have not only hurled hateful, insulting rhetoric about the LGBT community—they’ve made it clear that if elected, they will roll back the rights that so many have fought for.

“As President, I will continue to fight alongside the LGBT community to pass the Equality Act. I’ll support efforts to allow transgender personnel to serve openly, and I’ll end the dangerous practice of ‘conversion therapy’ on minors. I’ll expand access to HIV prevention and treatment, and confront the epidemic of violence facing the transgender community, especially transgender women of color. And I’ll continue the efforts I led as Secretary of State to advance the human rights of LGBT people around the world. I’m proud to stand with the Human Rights Campaign in this fight. Together, we can and will make our country—and our world—more just, fair, and equal for generations to come.”