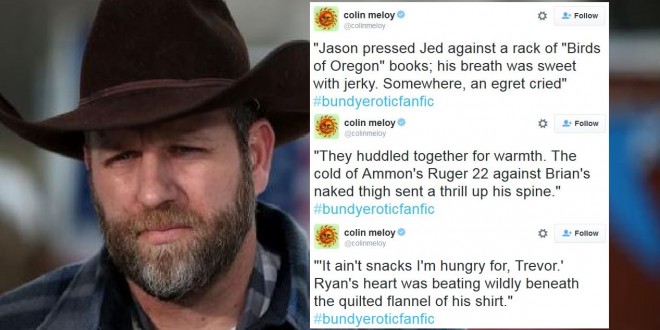 How About Some Oregon Militia Homoerotic Fan Fiction?

JMG reader Scott points us to the Twitter account of Colin Meloy, lead singer for The Decemberists, who has launched the hilarious hashtag #bundyeroticfanfic. More examples are below.

The Portland Mercury‘s Shelby King plays along: “Hungry and cold, Ammon soon found his limbs entwined with Trevor’s. He was unsure where he ended and Trevor began. ‘It’s for warmth,’ he told himself. He pulled out his Magnum and gripped the barrel, locking eyes with Ammon. Ryan held the cold steel to his brother’s naked flank. Ammon gasped with pleasure and desire.”

Atop a bluff, Ammon undid his trousers to relieve himself. From behind came Jed. “Let me hold it. Your hands are cold” #BundyEroticFanFic

He wanted snacks, but what he needed was for Cletus’ calloused hands to explore every inch of his body #bundyeroticfanfic

“Bittern. Chukar. Whimbrel. Black-capped chickadee.” Their Bushmasters lay by their side in the veiled moonlight. #bundyeroticfanfic (2/2)

@colinmeloy “Not on top of my copy of Atlas Shrugged,” he almost said. He let it happen. Someone passed him using the US flag as a towel. — Boozy Hobo (@Boozy_Hobo) January 6, 2016

@colinmeloy Zek had fired some big guns before, but this would be his first true magnum. #bundyeroticfanfic