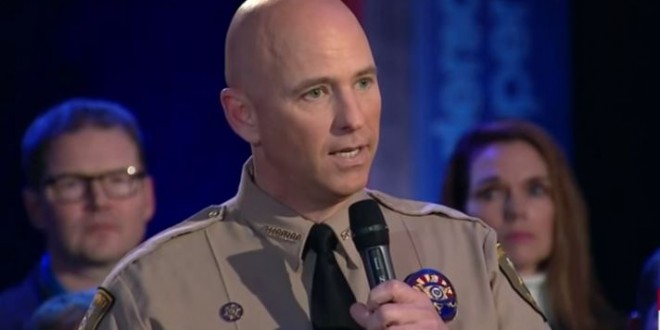 CNN invited right-wing sheriff Paul Babeu to pose a question to President Obama on his recent executive actions on guns. Babeu, a well-known anti-immigrant xenophobe whose past campaigns for political office have been propped up by conservative media, has baselessly attacked Obama in the past over his immigration enforcement record and has previously appeared on 9/11 conspiracy and white nationalist shows. Fox News has consistently provided Babeu with a platform to attack Obama.

Babeu is making his second run for the US House and when Obama wished him luck on his race, Babeu said, “I don’t want your endorsement.” The president laughed and said, “I’m sure that’s true. That’ll hurt you. I’m sure it’s a Republican district.”

PREVIOUSLY ON JMG: In March 2012 the Mexican ex-boyfriend of Arizona Sheriff Paul Babeu sued him for $1M, alleging that Babeu had threatened to have him deported if the boyfriend were to out him. Babeu’s run for the US House fizzled shortly thereafter, but not before it was revealed that he had spoken at an event staged by a group that wants to end illegal and most legal immigration and wants to end automatic citizenship for children born in the United States. Last year Babeu led a mob of raging teabaggers as they screamed abuse at migrant children being transported on federal buses.