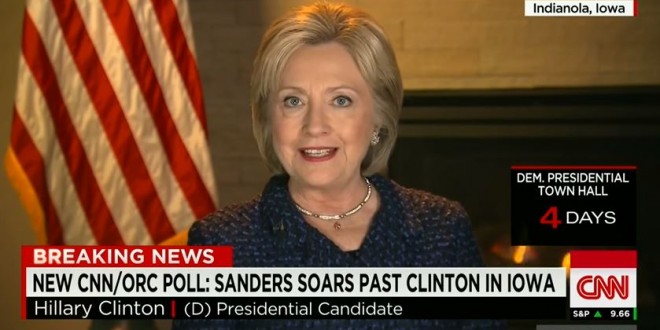 This nonsense has been going on for a couple of days and I’ve ignored it until now because it’s just such a dumb argument. Anyway, yesterday afternoon Hillary Clinton took to CNN to respond. Video is below. Via CNN:

Hillary Clinton on Thursday sought to turn Sen. Bernie Sanders’ “establishment” attack right back on him — saying he served in Washington much longer than she did. She also attacked his experience and fitness to lead the country, criticizing his suggestion that the U.S. should warm its relationship with Iran.

The Democratic front-runner told CNN’s Wolf Blitzer on “The Situation Room” that Sanders’ charge that Planned Parenthood and the Human Rights Campaign support Clinton because they are all part of the establishment didn’t make sense to her.

“I just don’t understand what that means. He’s been in Congress, he’s been elected to office a lot longer than I have,” Clinton said. She noted she only served in the Senate for eight years. “He’s been in the Congress for 25. And so I’ll let your viewers make their own judgment,” Clinton said.