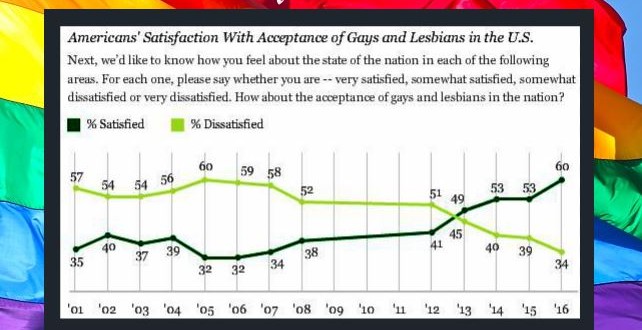 Satisfaction With Acceptance Of Gays At New High

A new high of 60% of Americans say they are satisfied with the acceptance of gays and lesbians in the U.S. — up from 53% in 2014 and 2015. As recently as 10 years ago, satisfaction was as low as 32%. The latest poll marks the first time that majorities of Americans from within the three major political identifications report being satisfied with acceptance of gays and lesbians in the U.S. Democrats remain the most satisfied (67%), as they have been since 2012. Meanwhile, 59% of independents and 54% of Republicans report being satisfied on the issue.

Over the past 15 years, Democrats were least satisfied — ranging between 27% and 38% in satisfaction — during the administration of President George W. Bush, a Republican president who called for a constitutional amendment to ban same-sex marriage as he campaigned for re-election in 2004. But as Democratic President Barack Obama completed his first term in office in 2012, Democrats’ satisfaction climbed to 48% and has gained 19 percentage points in the years since.