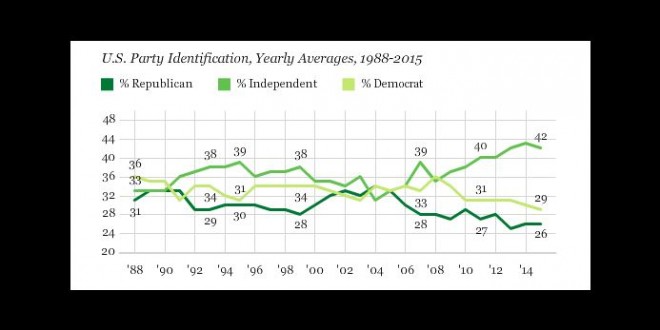 But GOP isn’t doing much better. Via Politico:

The share of Americans identifying as Democrats dropped to a record low in 2015, according to the latest Gallup results published Monday, in the latest indication that Americans’ attachment to either political party is at or nearing historical lows.

Overall, 42 percent over the course of the past year identified as independents, a slight drop from the 43 percent who identified as such in 2014. While Democrats maintained a small advantage over Republicans — 29 percent to 26 percent — the Democratic share is at its lowest in Gallup history.

Prior to 2015, the lowest share of Americans identifying as members of the Democratic Party came in 2014, with 30 percent. Going back to 1988, 29 percent is the lowest overall share of self-identified Democrats since the polling institution began interviewing subjects via telephone instead of in person. According to its data from 1951 to 1987, however, there was never a year in which less than 37 percent identified themselves as Democrats, making the 29 percent the lowest in Gallup’s 65 years of asking the question.

The GOP is presently at one point above its 1988 all time low of 25 percent.