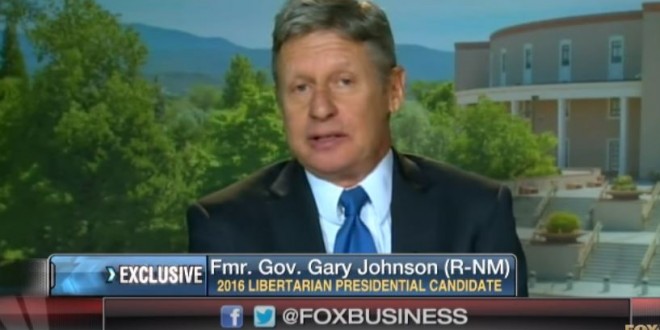 Former New Mexico Governor Gary Johnson has announced that he will run for president as a Libertarian. He was the Libertarian Party’s 2012 presidential nominee.

Johnson says America’s debt is the biggest issue facing the country, telling Fox’s Neil Cavuto that he estimated the nation’s debt will be $20 trillion by the time Pres. Barack Obama leaves office. He calls himself a fiscal conservative and a social liberal.

Johnson is a self-made millionaire who most recently served as the president and CEO of Cannabis Sativa, a marijuana marketing and distribution company based in Nevada.

Johnson is pro-LGBT, pro-choice, anti-war, and has said that he “doesn’t seek the counsel of God” in his decision making. During the 2012 cycle, Johnson declared that he was the “strongest advocate for same-sex marriage” in the race.

Previous SCOTLAND: Trump Threatens To Pull Alleged $1B In Investments Over Proposed Ban From Britain
Next Huckabee: Hate Groups Won’t Endorse Me Because They Know I’ll Put Them Out Of Business [AUDIO]