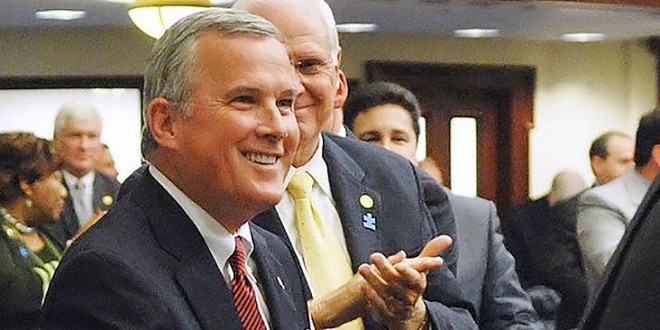 Environmentalists are rallying in Tallahassee today after the Florida Senate advanced GOP Sen. Garrett Richter’s bill that would override any local laws against fracking and oil exploration. Under Garrett’s proposed bill, all energy-related regulations would be placed in the hands of a Republican-run state agency. From the Guardian:

Opponents fear that removing the rights of cities and counties to prohibit fracking, and voiding the dozens of resolutions already passed by them, would make it easier for the oil industry to obtain permits to drill in the ecologically fragile Everglades. That, they say, would threaten the habitat of numerous species of wildlife in the so-called River of Grass and move heavy drilling equipment closer to residential areas.

In particular, they fear that the controversial drilling practice which uses high pressure water and acid to release contained oil or gas, could lead to the seeping of toxic chemicals into the porous limestone bedrock throughout the Everglades, and into the underground Biscayne Aquifer that is the only source of fresh water for more than three million people in south Florida.

“Florida already bans offshore drilling off its coasts, the Everglades should be treated the same way,” said Matt Schwartz, executive director of the South Florida Wildlands Association, whose members were joining a protest rally at the Florida state capitol in Tallahassee on Tuesday.

They’ve clearly learned NOTHING from Flint. Read the full bill.