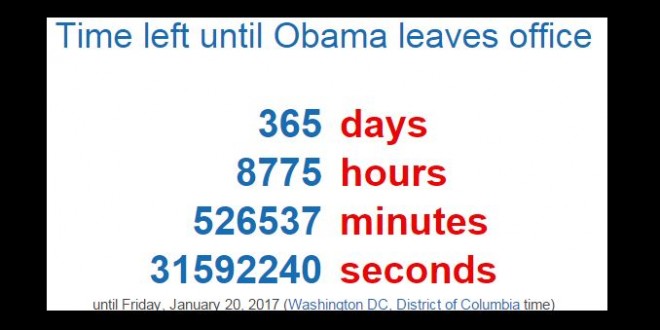 Drudge Celebrates: One Year From Today

The top link on the Drudge Report this morning takes you to an “Obama leaves office” countdown clock. Over the weekend, the New York Daily News ran a full-page op-ed piece on why we’ll miss this president. An excerpt:

We’ll miss his graceful style and an undervalued record of achievement that – with a year to go — has already put him in the ranks of fine American Presidents. Of course we won’t all miss him, but even many Republicans who despise Obama may look back with nostalgia at low inflation, low interest rates and low unemployment, with no American troops other than a smattering of Special Forces in combat abroad.

Despite persistent income inequality, stagnant wages, a broken immigration system, the threat of ISIS and plenty more woes, Obama’s legacy has been one of slow but consistent progress. He will likely end his presidency with the unemployment rate cut in half (to 5%) and the budget deficit cut by more than two-thirds.

But there’s a binary quality to the larger Obama legacy: If he is succeeded by a Democrat, his achievements will be solidified and built on. If a Republican takes over, the new President will join with a Republican Congress to dismantle much of what his predecessor built. Meaning: We already know history will judge him as a good President; whether or not he’ll be seen as great depends on what happens at the polls in November.