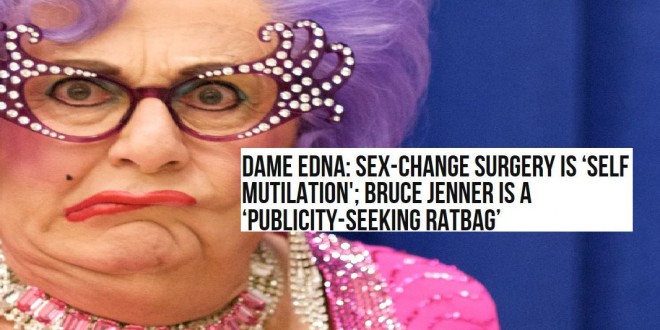 As an expat, Humphies is always grouped with fellow Australians Germaine Greer and Clive James. “I don’t mind; they’re friends,” he says. On the other hand, he disliked being linked to Rolf Harris. “He behaved evilly,” says Humphries.

Greer attracted fury after claiming that “trans” women such as Caitlyn Jenner (formerly the Olympic athlete Bruce Jenner) are men “who believe that they are women and have themselves castrated”, with students at Cardiff University describing Greer as “transphobic” and someone who should make all right-minded people feel “sick to [their] stomachs”.

Humphries is supportive of Greer in the controversy. “I agree with Germaine! You’re a mutilated man, that’s all,” he says. “Self-mutilation, what’s all this carry on? Caitlyn Jenner – what a publicity-seeking ratbag. It’s all given the stamp – not of respectability, but authenticity or something. If you criticise anything you’re racist or sexist or homophobic.”

Breitbart, of course, is doing cartwheels.