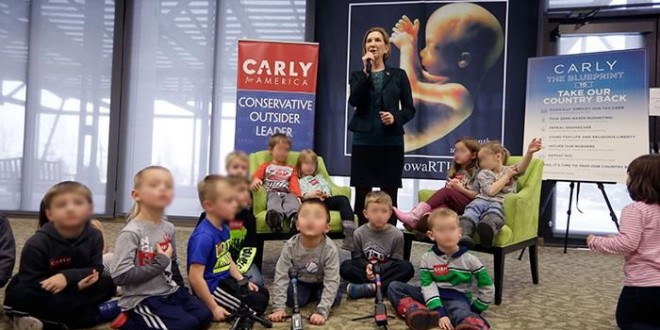 And yes, the parents are furious. The Guardian reports:

Carly Fiorina has been accused of “ambushing” a group of children, after she ushered pre-schoolers, who were on a field trip to a botanical garden, into an anti-abortion rally in Des Moines.

On Wednesday, the former Hewlett-Packard chief executive embarked on a day of campaigning across Iowa, in an attempt to boost her ailing presidential campaign.

The alleged ambush occurred when Fiorina hosted a “right to life” forum at the Greater Des Moines botanical garden. Entering the rally, before a crowd of about 60 people, she directed around 15 young children towards a makeshift stage.

The problem, one parent said, was that the children’s parents had not given Fiorina permission to have their children sit with her – in front of a huge banner bearing the image of an unborn foetus – while she talked about harvesting organs from aborted babies.

“The kids went there to see the plants,” said Chris Beck, the father of four-year-old Chatham, one of the children Fiorina appeared with. “She ambushed my son’s field trip.”

Actual response from Fiorina’s spokesperson: “We were happy that these children chose to come to Carly’s event with their adult supervisor.” One steaming mother told the Guardian that Fiorina will now never get her vote.