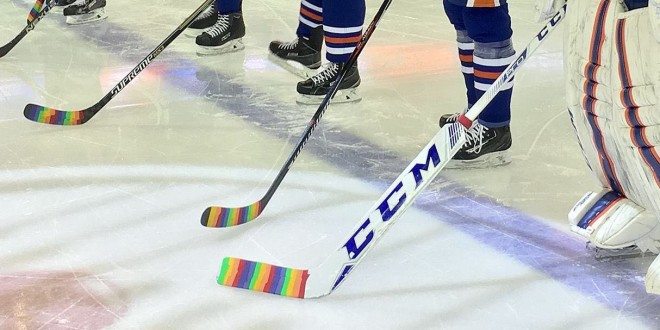 From the National Hockey League:

The Edmonton Oilers became the first NHL team to use Pride Tape, a multicolored tape to promote inclusiveness in sports. The Oilers used the tape Sunday during their annual Skills Competition at Rexall Place. “Many view professional hockey players as role models and our team felt this was a great initiative to let every person know they’re welcome in the game of hockey,” defenseman Andrew Ference told the Oilers website. “We’re all proud to play for a team and city that supports diversity and human rights.”

Wells and Calder Bateman Communications are working together on a Kickstarter campaign to raise enough funds to produce 10,000 rolls of the tape. As of Sunday, they have raised more than $40,000 of their $54,000 campaign goal. On the Kickstarter page, Pride Tape is described as a badge of support from the teammates, coaches, parents and pros to young LGBTQ players. It shows every player that they belong on the ice, that everyone is on the same team and your help is needed to make it a reality.