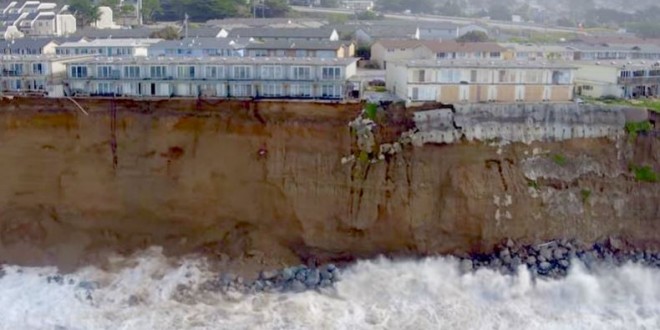 Dramatic drone footage has captured California homes on the brink of collapse at the edge of a cliff. Powerful weather caused by El Niño has eroded the land and left several in Pacifica buildings teetering over oblivion. The city declared a state of emergency last weekend partly due to accelerated erosion of the cliffs, where two properties were evacuated in recent days. The footage captured a large chunk of the cliffside breaking off under the apartments, as large waves smashed into the coastline below, reported KTVU Channel 2.

“El Niño is hitting the city’s coastline very hard and creating almost daily reports of impacts to both public and private property,” Pacifica City Manager Lorie Tinfow said in a statement. Other areas along the bluffs have given way in the past 10 days as several heavy storms and waves slammed into the shoreline, city officials added.