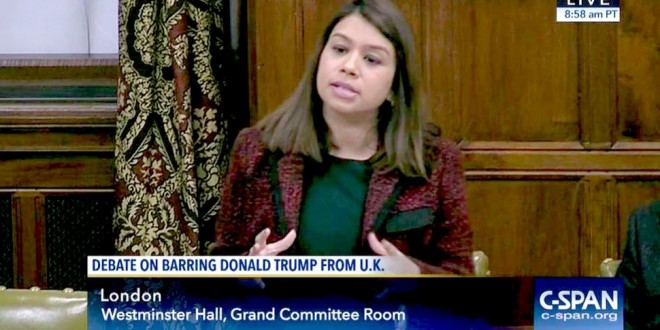 British lawmakers on Monday debated whether Donald Trump should be banned from Britain, after an online petition calling for him to be denied entry for making controversial anti-Muslim comments amassed more than 570,000 votes.

The unusual and, at times, passionate debate was held in response to the Republican presidential candidate’s statement that all Muslims should be temporarily barred from entering the U.S. in the wake of the shooting in San Bernardino last month that left 14 dead.

The debate was led by Labor member Paul Flynn, chairman of the Petitions Committee, who said there was a risk that banning Trump would give him a “halo of victimhood” that would only play into his hands. “We give him the role of martyrdom, which can seem to be an advantage among those that support him,” the lawmaker warned.

He explained that some argued the matter should not even have come before Parliament, but that it would have been “very difficult to ignore a vox pop that’s so sudden and thunderous and contains the signatures of half a million people.”

No vote was taken today as the decision rests in the hands of Home Secretary Theresa May. Prime Minister David Cameron does not support banning Trump. Watch every minute of Siddiq’s speech below.