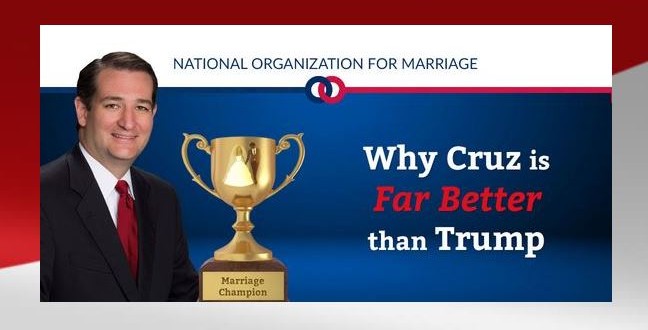 “The controvertible record demonstrates that Ted Cruz will be a champion for marriage while Donald Trump has abandoned the fight to preserve marriage as the union of one man and one woman. It’s just as simple as that. It’s very easy for skilled politicians to create an impression on the stump that they are with you and agree with your values and position on key issues. For example, pretty much every Republican candidate for president will say that they believe marriage is the union of one man and one woman.

“But that is a meaningless statement given where we are in the wake of the US Supreme Court’s decree imposing same-sex ‘marriage’ on the nation. Saying is one thing; doing is another. The real question is what will the various candidates actually do to fight to restore marriage to our laws and protect the right of people to continue to act in concert with their belief that marriage is only one man and one woman?

That is why NOM developed our Presidential Marriage Pledge and fashioned it along the lines of specific actions a candidate will take if elected president. And in the ‘doing’ department, Ted Cruz is light years better for us than is Donald Trump.” – Hate group leader Brian Brown, via press release.