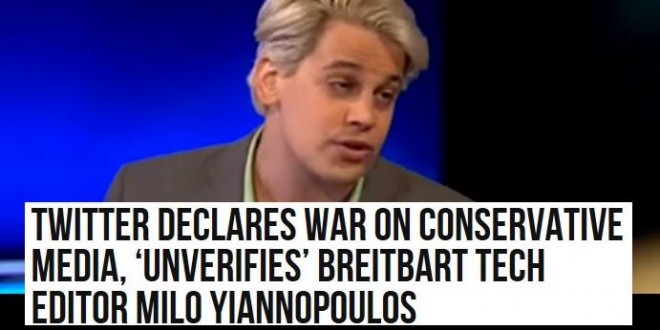 Twitter recently announced new rules against “abusive” accounts and all of Teabagistan is in an uproar today because Breitbart‘s raving homocon douche Milo Whatisopoulos has lost his “verified” check mark. It’s a war on conservatism and the First Amendment! They write:

Twitter has unverified the account of Breitbart technology editor Milo Yiannopoulos, effectively declaring war on conservative media by punishing the outspoken commentator for his views. This comes despite CEO Jack Dorsey declaring that Twitter “stands for freedom of expression” just a few months ago.

Yiannopoulos was informed via email that due to “recent violations of the Twitter Rules,” the blue tick marking his account as verified by Twitter had been removed. He was not told what rule he had violated, nor if there was any appeal procedure.

Yiannopoulos’s suspension led to an immediate and massive global backlash. The #JeSuisMilo hashtag was created and quickly trended in the United States, United Kingdom, Canada, Scandinavia, Germany, and over a dozen other countries with over 50,000 tweets posted to it. Within a few hours, it was the #1 top trending topic in the U.K, U.S, and Canada and it trended globally at the #3 spot for several hours.

Fans also demonstrated the necessity of verification by changing their usernames and profile pictures to copies of Yiannopoulos’s profile en masse. Absent the blue tick, it is now difficult to spot the real Milo from the thousands of tribute accounts on Twitter.

Last month Breitbart ran a column by Milo in which he declared that he’s “officially giving straight people permission” to call gay men “faggots.” The latest Milo flap only underscores his bizarre hero status at Breitbart, which rivals World Net Daily as the most viciously anti-LGBT site on the web.

Previous TRAILER: Sticky: A (Self) Love Story
Next Mexico Officials: We Caught Drug Kingpin El Chapo Because Of His Interview With Actor Sean Penn