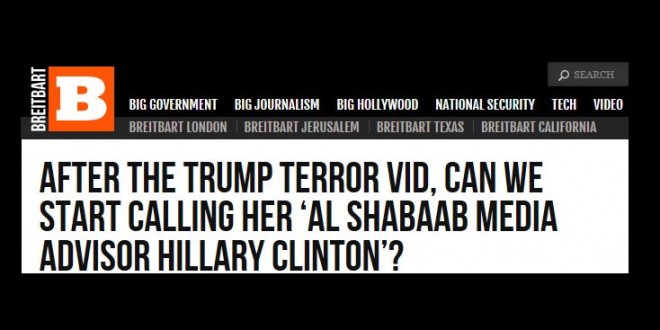 After ignoring the Trump terrorism video for more than a day, Breitbart has finally responded exactly as we’d expect them to. They write:

Let’s think about what that says about the former Secretary of State of the United States. Did she plant the idea in the minds of the brutal terrorist group? Or maybe these are the lovely “rebels against ISIS” we keep hearing about, with scant evidence, that every establishment global “leader” seems to want us to get into bed with.

Hell, even CNN reported after Mrs. Clinton’s fantastical statement: “Ultimately, however, there is no evidence of ISIS using videos of Donald Trump for recruitment.” You don’t have to be a genius to see how forlorn they are in their writing that it wasn’t actually true. But of course now every news outlet under the sun is running a story entitled: “ZOMG TRUMP IS IN A TERROR RECRUITMENT VIDEO” as if Mrs. Clinton was right all along.

She wasn’t right all along. She made it up, broadcast her idea live on international television, and someone in the Al Shabaab media team went, “Oh sh*t. You know how we can steal some of that international news coverage that ISIS keeps getting? Let’s actually make that video!”