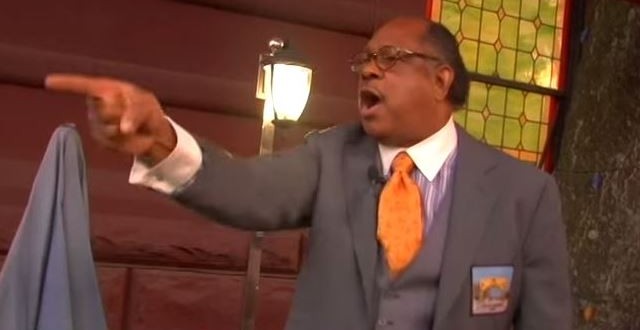 BOOM! DNA Info has the scoop:

The church that thinks “Jesus would stone homos” is scheduled to be put up for public auction next month because their pastor hasn’t paid his debts.

A state judge ordered Atlah Worldwide Church to be sold at a public foreclosure auction after failing to pay creditors more than $1.02 million, court records show.

Church leader Pastor James Manning said in a phone conversation with DNAinfo New York that the foreclosure was mostly over unpaid water and sewage bills and vowed to fight the order, claiming his church’s tax exempt status means he doesn’t have to pay.

“I assure you, it’s about a water bill and a tax that can’t be levied against this church,” Manning said. “I think it’s a land grab quite frankly.” What Manning didn’t say is that there are nine federal tax liens against him totaling more than $355,000 from as far back as 2002. He also owes New York State for more than $28,000 and other creditors more than $30,000, public records show.

According to city records, the Internal Revenue Service released a federal lien against Manning in 2006 and the Bank of New York Mellon was assigned that lien in 2010. The church does receive $186,000 in tax exemption benefits from New York City, records show.

Also per city records, Manning owes $194,000 just in unpaid water bills. Maybe his BFF Donald Trump can help him out. SNORK! Manning hasn’t mentioned the court order on his busy YouTube channel, where today he called for boycotting Fox News and sending them into bankruptcy. Oops. Instead of watching that, below is his recent screaming meltdown during a protest outside his church.