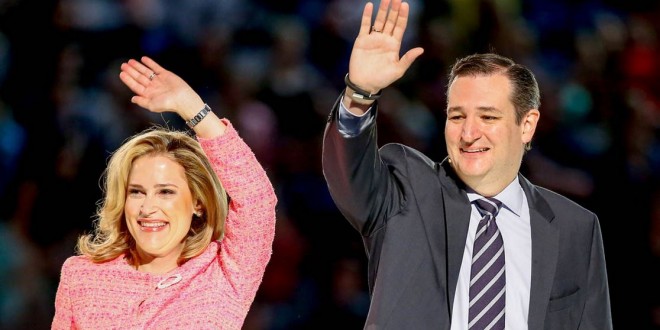 The Federal Elections Commission is likely have a big problem with this. The New York Times reports:

As Ted Cruz tells it, the story of how he financed his upstart campaign for the United States Senate four years ago is an endearing example of loyalty and shared sacrifice between a married couple.

“Sweetheart, I’d like us to liquidate our entire net worth, liquid net worth, and put it into the campaign,” he says he told his wife, Heidi, who readily agreed.

But the couple’s decision to pump more than $1 million into Mr. Cruz’s successful Tea Party-darling Senate bid in Texas was made easier by a large loan from Goldman Sachs, where Mrs. Cruz works. That loan was not disclosed in campaign finance reports.

Those reports show that in the critical weeks before the May 2012 Republican primary, Mr. Cruz — currently a leading contender for his party’s presidential nomination — put “personal funds” totaling $960,000 into his Senate campaign. Two months later, shortly before a scheduled runoff election, he added more, bringing the total to $1.2 million — “which is all we had saved,” as Mr. Cruz described it in an interview with The New York Times several years ago.

Just a few days ago Cruz attacked Goldman Sachs for getting “special favors” from the government.

Previous Cindy Jacobs: I Commanded The Clouds Over Israel To Dissipate During A 700 Club Photo Shoot [VIDEO]
Next Huckabee Flips Out At Question On Duggars: You’re Abusing The Reputation Of A Godly Family! [VIDEO]