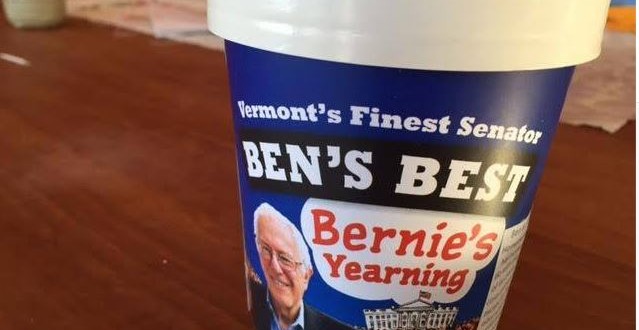 The co-founder of Ben & Jerry’s is holding a contest to win pints of “Bernie’s Yearning” ice cream. Via The Hill:

“Jerry and I have been constituents of Bernie Sanders for the last 30 years,” Ben Cohen said of the Vermont senator. But he noted that his company with fellow co-founder Jerry Greenfield is not directly involved with the flavor.

“We’ve seen him and we believe him,” he continued on a website touting the ice cream. “When we’re out speaking on his behalf people always ask if there’s a Ben and Jerry’s flavor. “There’s not,” Cohen added. “But if I were going to come up with one, this is what it would be.”

Cohen’s website describes “Bernie’s Yearning” as plain mint ice cream beneath a solid layer of chocolate on top. “The chocolate disc represents the huge majority of economic gains that gone to the top 1 percent since the end of the recession,” the flavor’s packaging states. “Beneath it, the rest of us. Dig in, and share with your fellow Americans.”

The pints are signed and numbered. Enter to win here.