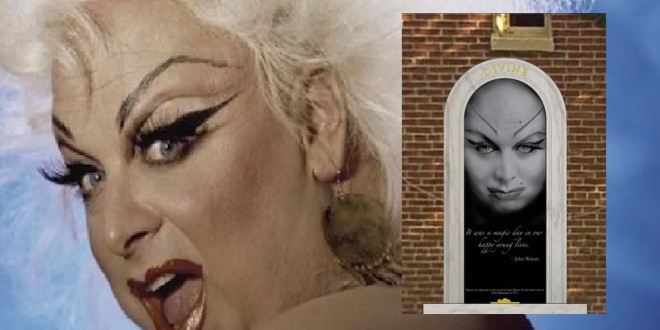 The corner of Read and Tyson Streets in Baltimore will forever bear the glorious ghost of an iconically filthy moment: Divine (aka Harris Glenn Milstead), as Babs Johnson in John Waters’ Pink Flamingos, asserting her status as the “Filthiest Person Alive” by watching as a dog poops, approaching the poop, and then eating the poop.Soon — Kickstarter gods willing — this moment will be commemorated with an eight-foot-tall monument at that very street corner. No, it’ll no longer be a ghost people step through unawares (incidentally, much like dog poop), but rather a gargantuan, unmissable work of art, homage, and filth. And apparently Baltimore’s mayor, Stephanie Rawlings-Blake, is completely down.

From the Baltimore Sun:

“The mayor thinks that the idea sounds divine,” said Howard Libit, a spokesman for Mayor Stephanie Rawlings-Blake, “and looks forward to seeing more details on the proposal.” The monument, which supporters believe would cost between $50,000 and $100,000, would rest on the side of a house at the corner of Read and Tyson streets, on the western fringe of Mount Vernon. The actual scene, according to those who were there, was shot on a lot alongside a house in the 800 block of Tyson St., where Pat Moran — a long-standing member of the Waters troupe, known collectively as the Dreamlanders — was living at the time. The proposed site is actually across the street from the house, at a location (a blank wall) its designers thought would work better.