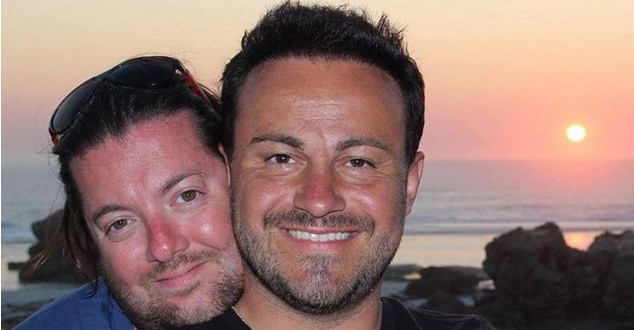 Marco Bulmer-Rizzi’s voice is quiet and steady on the phone from Australia as he tries to stay composed – to explain what has happened, the magnitude of what he has lost, and the sense of injustice he feels.

Last Saturday, while on honeymoon in Adelaide, South Australia, his new husband, David Bulmer-Rizzi, 32, [left in photo] died suddenly after falling down a staircase and cracking his skull at the home of the friends they were visiting. Both were British citizens, but because same-sex marriage is not recognised in Australia, and in the state of South Australia even same-sex marriages from overseas are not legally recognised, Bulmer-Rizzi, 38, was told his husband’s death certificate would state two words under the deceased’s marital status: “never married”.

And because Bulmer-Rizzi is therefore not recognised as the next of kin, all the decisions surrounding his husband’s death have had to be approved by his father-in-law, Nigel Bulmer. Also speaking to BuzzFeed News, Bulmer, 60, said: “It’s degrading. It demeans my son’s memory and denies their relationship. It’s cast them as second-class citizens. No one should ever have to go through what we’ve gone through. We’re at the bottom and somebody has dug a deeper pit.”

The British government is sympathetic, but say their hands are tied. If David had died in the next state over, the marriage would have been recognized. Hit the link for much more.

UPDATE: The premiere of South Australia has vowed to make this right. Also from Strudwick:

Jay Weatherill, the premier of South Australia, has personally telephoned Marco Bulmer-Rizzi, the British man whose husband died on honeymoon in Adelaide and whose marriage was not recognised, to apologise for what happened.

Speaking to BuzzFeed News on Wednesday, Bulmer-Rizzi, who was told that his late husband’s death certificate would read “never married” because South Australia does not accept overseas same-sex marriages, said Weatherill “phoned me directly. We were on the phone for a good 10 minutes. He apologised. He said he would work on ways they can bring a change to avoid this happening in the future.”

Bulmer-Rizzi, 38, added: “They are looking to actively change it through legislation and he told me it would happen in the next few months. He promised me that they would reissue the death certificate once that has happened.”