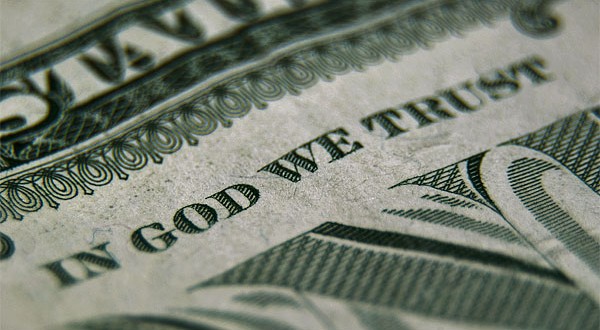 “In God We Trust” first appeared on US coins in 1864 and was added to paper currency in 1957 during the height of the red scare. Atheist activist Michael Newdow is trying again to put an end to it, but this time he’s using the Hobby Lobby tactic. Hemant Mehta reports at Friendly Atheist:

The federal lawsuit, which was filed in Akron, Ohio, may be unique for relying not on the First Amendment’s Establishment Clause, but on the Religious Freedom Restoration Act (RFRA). In essence, Newdow takes the same argument used by Hobby Lobby to get out of covering contraception for its employees and says that the U.S. Treasury can’t push God onto atheists without a “compelling governmental interest,” which he believes they don’t have.

This particular lawsuit has 41 plaintiffs. They include many unnamed parents and their kids, several named individuals, the Michigan Atheists and Northern Ohio Freethought Society groups, and one believer (Adam Clayman). The defendants include Congress, the government, the Secretary of the Treasury, and others.

By placing “In G-d We Trust” on the nation’s coins and currency bills, Defendants have substantially burdened Plaintiffs in the exercise of their Atheistic (and similar) beliefs by requiring them — as the price to pay for using the nation’s coins and currency bills — to personally bear a religious message that is the antithesis of what they consider to be religious truth. Similar, for Plaintiff Clayman, Defendants have required him to sin.

In 2004 the US Supreme Court ruled against Newdow in his bid to have “under God” removed from the Pledge Of Allegiance. “Under God” was added to the pledge in 1954.