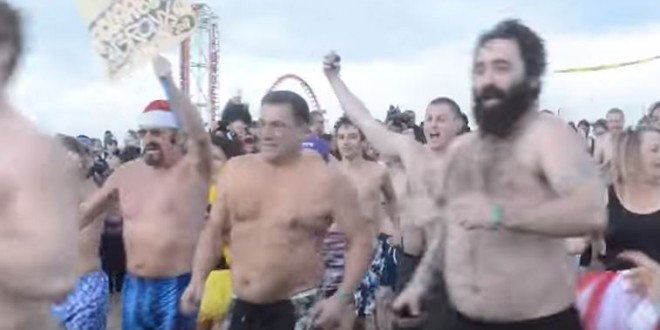 Yesterday afternoon thousands of totally insane people took off their clothes and ran into the Atlantic Ocean for the annual Coney Island Polar Bear Club New Year’s swim. Afterwards, most of them claimed it was “fun” or “invigorating” or “a great way to start 2016”, but the guy shivering so violently that he couldn’t talk or even sip his beer was the only one telling the truth.

As always there were plenty of crazy costumes, enthusiastic pre-gaming at Ruby’s, instant camaraderie and bonhomie, shrieks of terror and delight, and, considering that neither the holiday (New Year’s) nor the act itself (swimming in winter) is specifically American in any way, an oddly intense level of patriotism.