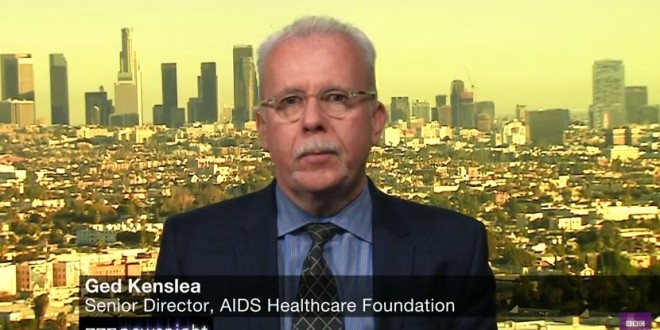 The use of the medication Truvada as an HIV preventive, a strategy known as PrEP, has not yet been approved by Britain’s National Health Service, a step the FDA took in 2012. Last night the BBC hosted a discussion on the issue in which a representative from the Los Angeles-based AIDS Healthcare Foundation expressed his reservations. As you probably know, the AHF has vigorously opposed PrEP with national advertising campaigns. In the clip below, British reporter Patrick Strudwick declares that “the battle for condom use has been lost.” Clip recap:

Should a pill to prevent HIV be handed out free to gay men before they have sex? This is a question the NHS is actively considering right now. The medication Truvada – or PrEp – prevents new infections by killing the virus before it has a chance to take hold. One of Britain’s leading LGBT journalists , Patrick Strudwick gives us his take. Emily Maitlis then discusses with Dr Michael Brady from the Terrence Higgins Trust, and Jed Kensley, senior director of the AIDS Healthcare Foundation,