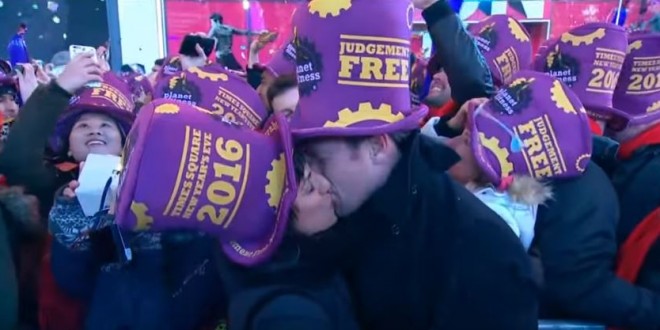 Here’s a great narration-free clip of last night’s festivities in Times Square, brought to you by Planet Fitness, whose logo adorned every stage and every head. Still better than the Year Of Nivea. As tradition holds, the ball drop was followed by Frank Sinatra’s New York, New York. After that came Ray Charles  and then Israel Kamakawiwo’ole’s gorgeous take on Over The Rainbow, which always chokes me up. I love watching the ball drop, but like most New Yorkers, I’ll never ever actually be there.

Previous Ted Cruz To Volunteers: Attacks On Me Are Coming So Strap On The Full Armor Of God
Next Singer Natalie Cole Dies At Age 65