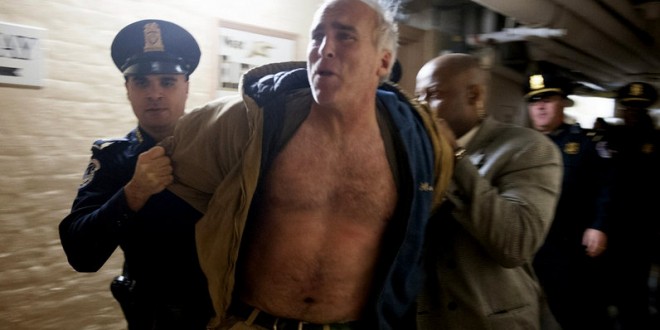 Nutjob anti-gay and anti-abortion activist Rives Miller Grogan pleaded guilty to disrupting the Supreme Court’s Obergefell hearing back in September. Today he was sentenced to 21 days in jail and ordered to stay away from the court building for one year. Via the Washington Post:

Grogan, 50, of Mansfield, Tex., pleaded guilty in September to one misdemeanor charge of unlawful picketing or parading relating to his shouting during the high court’s April 28 session: “If you support gay marriage, then you will burn in hell.” He also called same-sex relationships an “abomination.”

Grogan, wearing a gray sweat shirt printed with the phrase “Pro-Life,” asked U.S. District Judge Randolph D. Moss for probation and said he hoped the court would recognize that his protests against gay marriage and abortion were rooted in his Christian faith. “Me being a Christian, Jesus said ‘go proclaim it everywhere,’ ” Grogan said, adding that his sentence “is a consequence I’ll have to take.”

RELATED: In 2012 Grogan was arrested by DC police after he climbed a tree during Obama’s second inauguration to scream anti-Obama slogans. Grogan has disrupted many events around the nation and has been ejected from the US House and Senate galleries for screaming. In 2013 a DC district judge permanently banned Grogan from the city, spawning a freedom of speech debate.